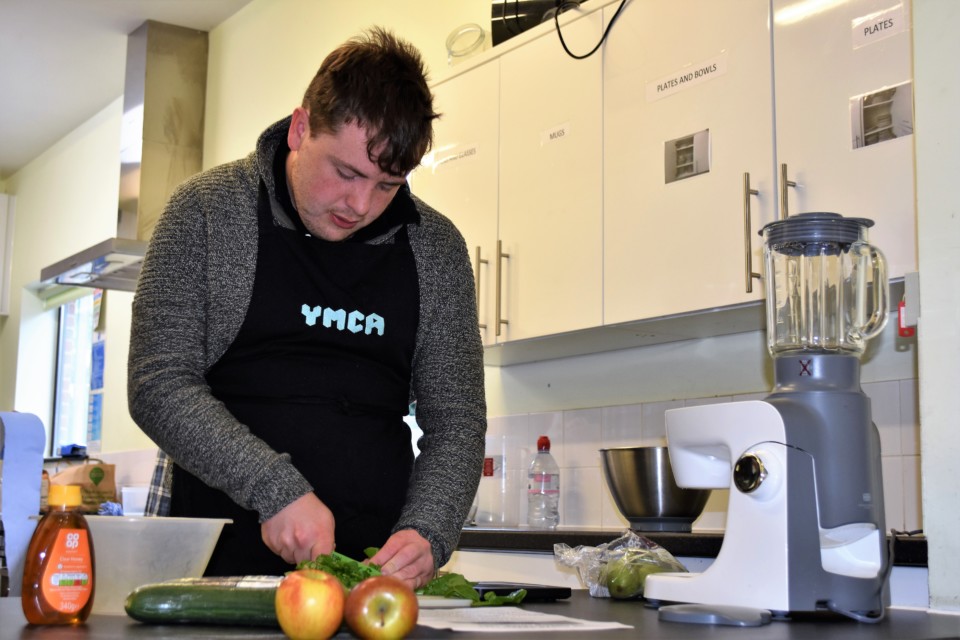 “There was a time when we struggled to see a path ahead for Daniel to achieve a fulfilled and independent life.” says his mother, Patricia.

Diagnosed with Autism Spectrum Disorder by the age of three, Daniel grew up in a busy house with three siblings. At times, even interacting with his extended family was both stressful and overwhelming and he struggled with anxiety, communication issues, self-harming and mood swings. Those days are now over.

“As parents of a child with complex needs, we believed in him and could see his potential, but also the extreme difficulties in his way. Luckily for us, we found the YMCA,” says Patricia.

Inspired by Daniel’s interest in food, the family were put in touch with the YmmmCA Café which is run from the Sovereign Centre in Reigate by young people with additional needs. Daniel began to attend the project in early 2016.

He was very nervous at first but the changes we’ve seen over time have been transformational.

“During our first meeting, Daniel had his head in his hands and refused to look up unless heavily prompted” remembers Stuart Longstaff, YMCA Inclusive Youth Projects Worker. “Since then he has really come out of his shell. He has developed his cooking, cleaning and other food-based life skills, while learning to manage his mood changes, interact with others and concentrate on the tasks he is given.”

Stuart also encouraged Daniel to attend the Friday Night Project, our social club for young people with learning difficulties. He grew to enjoy the minibus outings and activities, which helped him to handle new environments and mix in larger groups.Last year, 152 young people benefitted from our inclusive youth projects, including the YmmmCA Café and the Friday Night Project.

“The café was a godsend. Most importantly, it wasn’t just another ‘activity’,” says Patricia. “It provided the intelligent approach that was needed to help Daniel develop a work ethic that has opened up real opportunities for the future.”

Now 25, Daniel is currently volunteering in a busy London café and working towards an NVQ. His dream of achieving paid work in a catering environment is moving closer. He has got a reputation for being a hard worker and a friendly team member, with a terrific sense of humour and a particular talent for delicious and interesting flavours in his cooking. His cakes and pastries regularly sell out.

“Without the basic grounding from the YMCA Café, volunteering in London would have been too much for him, but now he absolutely loves it.” says Patricia.

“Stuart saw the potential in Daniel, set him boundaries and built up his confidence until he began to believe that he could do this. We hope he will get a paid apprenticeship in the future.”

“Thanks to the constructive, creative and supportive environment at the YMCA, Daniel is now on a forward trajectory towards building a vocation.”