Kayleigh Kopieczek, a member of YMCA East Surrey’s WAVES youth group, triumphed over strong competition and was crowned Young Achiever of the Year at the highly anticipated return of YMCA’s Youth Matters Awards on Friday 5 November.

Kayleigh, 19, from Leatherhead won her title at the leading youth charity’s national ceremony, which was held at the exclusive Sheraton Grand Hotel in London’s Park Lane and hosted by acclaimed comedian and expert quizzer of ITV’s The Chase, Paul Sinha.

The Young Achiever of the Year Award recognises the exceptional achievements of a young person who has overcome significant obstacles to make a real difference to their lives and their community. Kayleigh was one of five young people to make it through to the awards night after battling through judges’ shortlisting and an online public vote.

Kayleigh experienced severe bullying at school which affected her mental health and left her too anxious to go out in public or socialise with her peers. Through support from the WAVES group and lots of determination, Kayleigh has managed to turn her life around. She was praised by judges for creating positive mental health activities that young people could do at home during lockdown, recording inspiring mental health videos and helping to lead Zoom sessions alongside youth workers around important wellbeing topics. 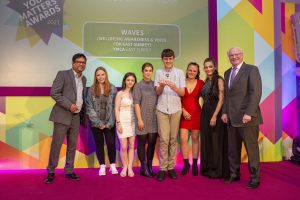 YMCA East Surrey’s WAVES project (which stands for Wellbeing, Awareness and Voice for East Surrey) also took home the top title of Health & Wellbeing Project of the Year. The youth group focuses on providing a safe place where young people can talk about mental health in a positive way and explore different coping strategies.

On winning the award, Kayleigh said:

“I am over the moon and so grateful to have won such a significant award – even reaching the final stage was overwhelming!

“My life has changed so much since getting involved with YMCA East Surrey and I appreciate everyone who has supported me along the way. Thank you to everyone who made this night possible, your encouragement means the world and I can’t wait to see what the future holds.”

“Throughout her time at WAVES, Kayleigh has grown more confident and independent. She has shown great compassion, turning her own experiences into something positive and helping us to keep WAVES running throughout the pandemic. Kayleigh is a great role model for younger members of the WAVES group.”

Youth Matters is YMCA’s national awards programme marking an integral part of the charity’s calendar since 2009 and was sorely missed last year due to COVID-19. It celebrates the outstanding skills and achievements of young people from across the country and also recognises the vital work that YMCAs deliver every day. After an incredibly challenging time, this year’s awards are even more vital in recognising the innovation and resilience shown by YMCAs in the continued and unwavering support shown for their communities.

Locally, YMCA East Surrey offers services which are inclusive for people of all ages and abilities, encouraging everyone to enjoy an active and healthy lifestyle and inspiring them to be the best they can be.