Reigate and Banstead Borough Councillor, Mark Brunt, who has been instrumental in the development of the project, cut the ribbon.

Cllr Mark Brunt said: “We as a community in Merstham said that we want more, and the Merstham Community Hub is the result of that. The Pre-School has happened because the community has worked together.”

“I’ve always been keen to work together with YMCA East Surrey on this project as they already do so much fantastic work with children and young people in the local area. We want to support children from Pre-School age, right through their teenage as they grow. It is about bringing services into Merstham where there is a lot of need.”

The YMCA Merstham Hub Pre-School, based at Portland Drive, will offer high quality and affordable childcare for up to 40 children aged 2-5 years. It is YMCA East Surrey’s second Pre-School in Surrey, with the first one opening in 2016 at the Sovereign Centre in Reigate. Ten children have been enrolled so far and will start at the Pre-School on Monday 1st April. 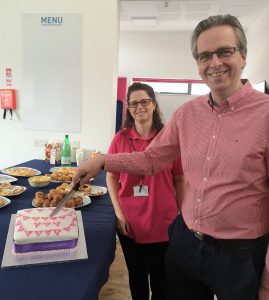 Merstham is an area with a diverse mix of families and cultures and has pockets of socio-economic deprivation despite being in the commuter belt. There are a high proportion of families eligible for FEET funding which is the Free Early Education funding for 2-year olds and priority for Pre-School admissions will be given to families facing disadvantage.

Judith Brooks, YMCA Head of Children’s Services, said: “It’s been quite a journey to get to this point today, but we are delighted to welcome everyone to the Grand Opening of the YMCA Merstham Pre-School. YMCA East Surrey wants to help children belong, contribute and thrive within their own community and is already supporting them to do this throughout the local area.”

Sixty-five children attended the YMCA Sovereign Pre-School last year. In addition, over past year, YMCA East Surrey has provided 41,492 hours of short break care for families with children who have disabilities, plus school holiday places for 755 children and after school care for 380 children.

Pre-School Manager, Teri Morris, said: “There has previously been a lack of Pre-School provision in the Merstham area. We will have the highest expectation of care and aspiration for each child who joins us. Our staff will be supportive of parents, as well as the children in our care, working holistically with both adults and children.”

“We will aim to develop the children’s emotional and physical wellbeing in order to foster a lifelong love of learning.”

Already, the project has benefited from links with other charities, trusts and organisations. YMCA East Surrey would particularly like to thank Stripey Stork, who donated the equivalent of £2,000 of equipment, and the Merstham Millennium Trust who gave £1,000 to help enhance the outside area. Merstham Community Facility Trust have also been supportive and additional funding has come from Reigate and Banstead Borough Council and Surrey County Council.

It took more than 10 years for the concept of the Merstham Community Hub to come to fruition and work on the development of the YMCA Merstham Pre-School began in 2017.

Anyone wishing to enquire about a Pre-School place can email Teri at teri.morris@ymcaeastsurrey.org.uk or telephone 07732 602999.