In a day that celebrated fitness, fellowship and family achievements, the YMCA East Surrey Fun Run returned to Reigate’s Priory Park on Sunday 1 May.

The Adult 5-mile race welcomed 166 runners and was started by Reigate and Banstead’s Mayor, Cllr Jill Bray. Fran Dunham, running for Reigate Priory Athletics Club, was the first to cross the line in an impressive time of 29 minutes and 37 seconds. His son, Harry, later took second place for the boys in the Under 10’s race.

After collecting his winning medal and trophy, Fran, 43, said:

“This is my first race for three years. The YMCA Fun Run is a lovely, rolling course and the marshals did a great job today. It’s excellent to be back to normal!” 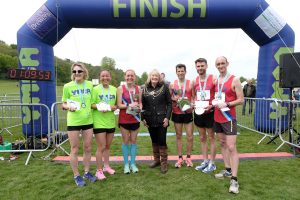 The first lady home over the Adult 5-mile course was Laura Ebbs, another Reigate Priory Athletics Club member, in a time of 33:24. Her daughter, Charlotte, came second in the Under 10 girl’s race.

Another mother and daughter duo – Hannah-Mai and Phyllis Flynn – were the second and third females to cross the line in the Adult 5-mile race.

59-year-old Phyllis joked: “Age before beauty!” while Hannah-Mai, 23, who took part in the adult distance for the first time, admitted that she might have been out-paced by her mother had the course been any longer.

“The May Bank Holiday weekend has not felt the same for the last couple of years without the Fun Run. It’s a great buzz to be back and

was lovely to see so many people of all ages and abilities enjoying getting active.”

Other notable achievements included Rob Wigley’s storming run of 5:37 in the Adult 1-mile race and Fun Run regular, Katie Foss, taking first place for the Under 16 girls in a time of 6:19.

7-year-old Jessica Webster had some words of wisdom to share after winning the Under 8 girl’s race:

“My favourite thing about running is helping other people,” she said. “It is good for them to watch and learn how to do it so they can get better. My brother is fast and he gives me lessons.” 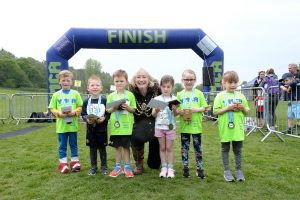 Winners of the Under 6 race were William Leung and Mariella D’andrea.

The YMCA Fun Run was held in conjunction with Reigate and Banstead’s Sports Festival. Many local sports clubs put on demonstrations throughout the day and invited spectators to take part in taster sessions.

Sponsors of the YMCA Fun Run were Brewers, the UK’s largest independent decorator’s merchant, who have supported the event for every one of its 22-year history.

“I would like to say a huge thank you to the staff, volunteers, councillors and marshals who have helped to make this event run smoothly,” said Ian Burks.

“Every one of the 650 runners who took part today has helped us to support those who are vulnerable in our local area.”

“Among other projects, the money raised will help to fund youth work which will reach over 1,000 young people aged 11-19 and a new emotional wellbeing and mental health service which will support more than 2,300 young people.”